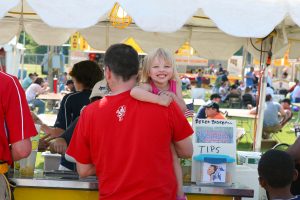 Over the past 22 years, residents from all over Northeastern Ohio have come to the Cleveland suburb of Berea to enjoy the Memorial Day Weekend annual symbolic summer kick-off: Berea’s National Rib Cook-Off & Beer Fest. The Cook-off has established itself as one of the premier events in the Cleveland area, and is accomplished through the tireless work of the Berea City Club, Inc. and local volunteers. The Berea City Club was founded in 1998 and have, since their inception, donated over a half-million dollars into the community. Projects either partially or fully funded and planned by the Berea City Club include: The Berea Clock Tower, Coe Lake Bridge, and Lou Groza Boulevard. With your help, the Berea City Club hopes to continue in its mission to improve the community… and all you really have to do to help is eat ribs (not a bad deal for you!). Memorial Day weekend will mark the festival’s 24th year at the Cuyahoga County Fairgrounds. The exact dates to remember are May 28-31, 2021.

Berea’s National Rib Cook-Off & Beer Fest is the signature event for Berea’s City Club. Their hard work is not just a weekend happening, it’s a year long event to all of its volunteer organizers. The Berea City Club’s Mission Statement is: To promote positive civic interests, for the betterment of The City of Berea. Perhaps unknown to many Berea residents, the Berea City Club is a not for profit organization contributing proceeds generated by its fundraising projects back to the community. In fact, since the beginning of the Berea City Club Inc. in late 1998, these business and community leaders have managed to donate over $1,000,000 from their events to City of Berea projects and local organizations. In fact, the list is too long to present every group that has been helped by the fine folks at the Berea City Club Inc. From churches to pageants, to Kiwanis and sports teams, to Polaris and school booster organizations, and including Berea Welfare and Options for Families, to arts and scouts, the Berea City Club Inc. is there.

A select group of Rib Teams will compete all weekend long to satisfy your appetite for ribs, serving up the best ribs and sauce you will ever taste! Other traditional Fair Foods will also be available.

The Children’s Activity Area will feature a Euro bungee trampoline, inflatable bounce house, and the ever popular Rock-Climbing Wall.

It felt GREAT to be back and it’s because of everyone who came out to enjoy!! We thank you and cannot wait to see you again. A special thanks to all our sponsors, ribbers, bands & organizers!!! ... See MoreSee Less

Saluting all our military on this Memorial Day - THANK YOU for your service.All retired and active military personnel presenting a military ID will be admitted FREE! ... See MoreSee Less

We apologize for the inconvenience of our berearib.com website being down. Your support and interest in our festival has been amazing and we thank you for that!Until we can get back up and running, we encourage you to call Hotline at 440-234-5181 if any questions.The Weather is perfect for outdoor festival and is open till 11PM this evening; on Monday (Memorial Day) 11am-7PM. Admission just $5 with over ten (10) rib teams and selection of craft beers. ... See MoreSee Less
View on Facebook
· Share

Here’s a snap shot of the weekend for those who need it :) Enjoying the great weather, sites & smells this holiday weekend!!! ... See MoreSee Less